Second Division League: Dempo want to maintain their lead at the top! 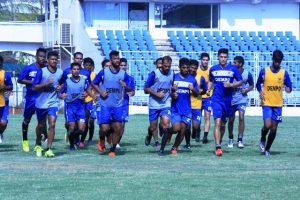 After 12 days break from the league exploits, Dempo SC take on Gangtok Himalayan SC at Fatorda Stadium as the Golden Eagles look to strengthen their position at the top in the Second Division I-League later today.

Mauricio Afonso’s men have shown their desire and urgency to get back into the Hero I-League and have been unbeaten in their last four matches and will look to record successive wins after beating NEROCA FC 3-0.

“At the moment, the team is in good shape and I want my team to perform the way they played against Neroca,” said Dempo SC coach Mauricio Afonso.

Dempo SC had earlier edged Gangtok Himalayan SC 1-0 in Gangtok and will aim for a similar result at Fatorda.

“Gangtok are a good side and we cannot take anyone lightly. We have to give our best and take each match at a time. We defeated them once. We’ll play for maximum points tomorrow,” said Mauricio.

Dempo SC are on 13 points, two points ahead of Minerva Academy – who are currently in second position and they host Mohammedan Sporting in Chandigarh.

“At the moment, we are leading but we cannot be relaxed as Minerva are just points below us,” added Mauricio.

Though the midfield has been the strength of the team, the team’s defense has been the talking point. With keeper Laxmikant Kattimani in goal and Nigerian Chika Wali marshalling the defence, the Golden Eagles have managed to keep a clean sheet in their past four games. However, with Uttam Rai being injured, Beevan D’Mello is likely to start against the Sikkimese team in today’s match.

@Arunfoot
Previous VIDEO – Lufthansa: Why everyone would like to be on Fanhansa!
Next Second Division League: Minerva Academy face Mohammedan Sporting in key match!