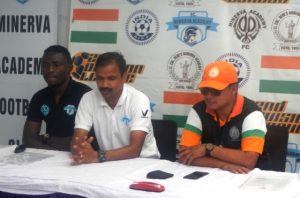 Minerva Academy FC will be playing their penultimate match of the final round of the Second Division League on Thursday, May 19 as they take on NEROCA FC at the Sector 17 Ground in Chandigarh.

Both sides managed to secure a win in their last game and one can expect a cracker of an encounter tomorrow.

A win for the home side will take them into the final match, where they will have to beat Dempo SC to qualify for the Hero I-League.

The first-leg match between the two ended in a stalemate as none of the teams could manage to score despite playing some good attacking football.

Second in the table with 15 points, five points behind Dempo SC, this match is of big significance for Minerva Academy as a win will keep their I-League hope alive. Anything less than a win would take Dempo SC the top flight.

“Understandably, this match is very crucial for us. If we loss, our journey ends here. But a win will keep us strong for the last match, where if we beat Dempo, we will qualify for the I-League,” coach Surinder Singh said.

NEROCA FC, on the other hand, are fourth in the league table with 11 points from 7 matches. So it is all about playing for pride for the team from Manipur as their chances of winning the league is really slim.

“We have come here for 3 points and we will do our best to achieve that. Minerva is a good team and it will definitely be a tough match. But we have played them earlier and so we know their strength and weakness,” said NEROCA FC coach Gift Raikhan.

On being ask if they still hope for the championship, he said, “Why not? We need to win our three remaining matches and hope that Minerva beats Dempo.”

NEROCA FC’s away form has been dismal in the final round, as the team from Manipur has failed to win a single away game, scoring just one goal in the process. Their best away result was in Gangtok where they drew against Gangtok Himalayan SC at the Paljor Stadium.

Minerva Academy have lost just one home game this season and one can expect fireworks from them right from the first whistle given what is at stake.

The match kicks off at 4pm.