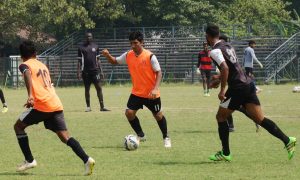 While Mohammedan SC has struggled to find form and only managed to garner a solitary point from 3 matches, Gangtok Himalayan SC are also enduring a disappointing campaign so far and have a mere 3 points from 4 matches.

The hosts, who played their last match against Dempo SC on April 7, come into the game on the back of an extended period of break after their match against Lonestar Kashmir FC last week has been postponed due to curfew imposed in North Kashmir.

However, Mohammedan Sporting coach Subrata Bhattacharya (Jr.) made full use of the break to iron out flaws and looking to make a new start with a win over the Sikkim outfit. The gaffer advised his side to forget about past and focus on the task at hand.

“The break has helped us a bit. We have managed to tighten the loose ends and hoping for a improved performance against Gangtok Himalayan FC,” coach Bhattacharya said on the eve of the clash.

“It is not that we are playing bad to drop points, but rather our boys are not able to capitalize on chances that came their way. I hope they won’t repeat the same mistakes tomorrow, against a side that will come hard at us for points.” He added further.

Playing in front of home fans should be the morale booster for Mohammedan Sporting, but the likes of James Moga and Simbarashe Gate will have to pull up more than socks or else the Black Panthers could find themselves in an even bigger mess.

Going into the match the Santa Kumar-led side will be depending heavily on former Atletico de Kolkata forward Nadong Bhutia to lead the attack. Furthermore, the likes of Nima Tamang, Bijendra Rai and skipper Bhaichung Bhutia (Jr.) will also form an important part of the side.

For the record, Gangtok Himalayan SC holds an unbeaten record against Mohammedan Sportng in the initial round of the competition wherein the visitors won once and drew the other match.

On the team news front, Mohammedan Sporting has been boosted by the availability of a full strength squad, with all players fit and raring to go.

The match at Mohammedan Sporting Club ground on the Kolkata Maidans kicks off at 3pm on Saturday.