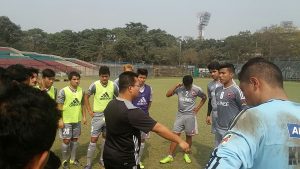 Amidst all the bigger names of Indian Football the fact that an Indian Club has been regularly reaping the benefits of the Youth Development structure have almost gone unnoticed. Shillong Lajong FC, presently in the semifinals of the Hero Federation Cup (after beating East Bengal Club) stay one of the few Clubs who have used the U-22 rule to their advantage in the Hero I-League, and that has been their trend for the past few seasons.

In a freewheeling interview to AIFF Media, Head Coach Thangboi Singto, an AFC Pro-Licence Coach himself, spoke at length about his U-22 Players, the philosophy of the Club, the AIFF Academy cadets who they have in their ranks, their forthcoming #HeroFedCup semifinal against Mohun Bagan and much more.

How do you manage to churn out the best from such a young squad?

It’s an exciting challenge to churn out the best from the young, talented Players. I have faith in the Club Management, the Coaching Staff and Senior Players who have the ability to deliver performances in the League. That in turn facilitates the development of the Young Players.

You have used the U22 rule in the Hero I-League to your advantage. How did you manage to do that?

We had some 20 Talented U-22 Players in the squad and this season we fielded 6 to 7 U-22 Players in every Hero I-League. They are playing because they deserve to play. And they have done well.

We have been noticing that stress on youth in Lajong over the past few seasons. Can you take us through the philosophy of the Club?

Since its inception Lajong’s philosophy has been to give opportunity to local talent and youth from Shillong and the North East. We have continued this trend and hopefully it will pay us more dividends. We keep it simple – all the Players know that if they work hard, they will have more chances to play more in the Starting XI than any other Club playing in the League.

This wouldn’t have been possible without the support of Club Chairman Mr. P.D. Sawyan and Managing Director Mr. Larsing Ming Sawyan who have been propagating and continuing with this philosophy.

Lajong has been a regular recruiter of AIFF Academy cadets and have regularly fielded them. What speciality do you find in the AIFF Academy graduates?

The AIFF Academy graduates have been exposed to the best Coaches and facilities with foreign exposure during their stay in the Academy. All these make them better in terms of play, decision making, respect to the Game and opponents and are mentally very strong. And when they gel with Lajong’s philosophy, the progression for them becomes much quicker and productive. Once they mature, they stay eligible to represent the Senior National Team. We expect to continue the relationship.

You have accounted for East Bengal in Round 1. Another Kolkata challenge awaits you in the semis. How different would it be?

East Bengal and Mohun Bagan are two of the oldest and biggest Clubs in India. Every Coach and Player want to do well while facing them. As an opponent we have the same respect for them and take motivation from the fact that we have done reasonable well against them.

What is Mohun Bagan’s biggest threat?

Mohun Bagan’s biggest threat stays their attacking line-up. Glen, Jeje, Norde and Yusa can tear apart any defence. Apart from that they also have Indian National Team Players in their ranks – Pritam, Pranoy, Lenny amongst others. They are Team good in all departments. But we have done well against them and will work hard.

In a double leg semifinal, do you prefer to play away first or vice versa?

Home or Away, a Team must do well to win Trophies. Our aim is to work hard and perform well in every match especially the Away Games where we have not done well.