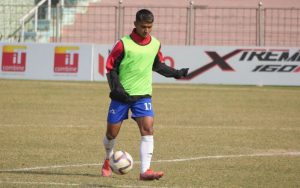 Indian Football is a fast-growing landscape. The 2021-22 season saw the inaugural edition of the Futsal Club Championship held in New Delhi. The turn of the New Year 2023 will further see the introduction of the National Beach Soccer Championship in Surat.

In this ever-changing footballing scenario, the players toiling it out in these arenas are also going through this dynamism. Fahad Temuri is one such suspect who has been shuffling between football and futsal over the last 12 months. After winning the Futsal Club Championship with Delhi FC last season, the teenager has once again reverted back to the longer version of the beautiful game, representing Delhi in the Santosh Trophy.

“Both football and futsal are similar, yet different. Futsal is faster. You need to be more skilful, maybe as skilful as a Brazilian,” Fahad said. “One also needs to think quickly in futsal, as you will not get much space or time to operate. Football is more about pacing yourself.”

“Futsal allows teams to make rolling substitutions, which means that you can run your heart out for five minutes, and then rest for a few minutes and come back again,” he said. “From that aspect, it’s quite different in football, where substitutions are permanent.”

Fahad, who considers himself somewhat of a flair player, hopes that playing in both versions of the game will help improve his skills.

“Both the sports are helpful to players in the longer run. Futsal is a Brazilian sport, and to excel in that, you need to develop your skills likewise. It really helps you quicken your thinking process, and makes you think two-three passes ahead,” he said.

Fahad himself is from a family that some might call the football royalty of the Capital city. His grandfather Sujat Ashraf had represented both Delhi and Bengal in the Santosh Trophy and had also represented India post-Independence; in his club career, he went on to play for Mohammedan Sporting Club. Fahad’s father Aftab Ashraf had also played in the Santosh Trophy for Delhi.

“My destiny with football began the day I was born,” smiled Fahad. “My grandfather was a great player who had played for India, and my father had also played for Delhi back in his days in the Santosh Trophy. Now I am also representing our state, and having three generations of footballers from the family is really a matter of pride for us all,” he said.

“I’ve heard so many stories about my grandfather when I was young, and I’ve always idolised him. I too would like to play for a club like Mohammedan Sporting like him one day,” said the 18-year-old.

Delhi secured qualification to the Final Rounds of the Santosh Trophy on the last day of 2022 with a 1-0 victory over last season’s semifinalists Karnataka, something that Fahad believes is a big thing for football in the Capital.

“The Santosh Trophy is an important tournament for us all. We have not been doing as well in the last few years, but this time things were different. The guys were all pumped up and the entire squad fought together,” said Fahad.

The winger believes that having a good showing in the Final Round will give impetus to football in Delhi.

“It’s very important for us to do well in the Final Rounds. I think we need to have a long camp with the entire squad and prepare likewise. Delhi has an old footballing culture, and there are good players in this city. They are some of the most disciplined boys I’ve seen. The Delhi players deserve to play at the top level,” said Fahad.