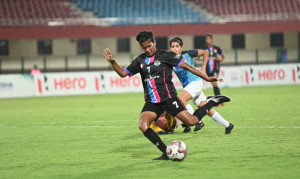 Hans Women FC were at the end of yet another humbling defeat in the ongoing Indian Women’s League. They lost to Sirvodem SC by a 4-0 scoreline at the Kalinga Stadium to stay at the bottom of the points table. Goals from Aleena, Jyoti, Sharda, and Sanfida ensured a second win of the campaign for SSC while inflicting an eighth successive defeat to HWFC.

Hans Women FC started the game brightly and it looked like the proceedings were evenly poised. However, SSC quickly took control of the match through Aleena’s opener. The lead was doubled by a precise finish by Jyoti who came close to scoring the third as well.

Just as the first half was coming to an end, Sirvodem SC scored two quickfire goals to take a commanding four-goal lead. Sharda scored a fabulous free-kick for the third while Sanfida scored seconds before the referee’s whistle to make it 4-0 in favour of her team. As for Hans Women FC, they had only one attempt on goal from Muskan Khan.

The second half saw Hans Women FC fire on all cylinders once again. They pushed for their opening goal of the match with an aim to reduce the deficit. Asha Thapa had room to take a shot five minutes past the hour mark. The attacker, however, sent her shot into the stands, failing to hit the target. Later, Sirvodem SC looked to have scored the fifth but the referee disallowed the goal owing to a player being offside in the build-up.

The final quarter of the match saw a more even contest with Sirvodem SC creating marginally better chances. Five minutes were added for stoppages at the end of the regulation period but neither team managed to find the back of the net during that time. The game finished without any goals in the second half.

In their next Indian Women’s League outing, Sirvodem SC has a meeting with Gokulam Kerala FC at the 7th Batallion ground on Tuesday while Hans Women FC will face high-flying Odisha Sports at the same venue on Wednesday.