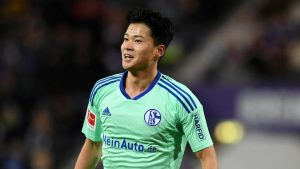 Another talent from the FC Schalke 04 Under-23s has made the step up to the first team. Attacker Soichiro Kozuki has put pen to paper on a professional contract valid until the end of the 2024/25 season. The deal also includes an automatic extension based on a certain number of appearances. All other details of the contract will remain undisclosed.

After a strong first half of the season with the U-23s – he was involved in 13 goals in 14 Regionalliga games – the 22-year-old was given the chance to impress during recent friendlies with the first team in December. “Soichiro has shown his potential in the friendlies and training sessions, not just because of his goals,” said Peter Knäbel, board member for sport. “We’re pleased that another player from our U23s has impressed with the first team. It’s now up to him to take the next step – we’ll give him the best possible support.”

“Soichiro is a good tackler, physical and strong too. He’s got bags of talent but is still at the start of his career,” commented head coach Thomas Reis. “Even if there have been comparisons with some brilliant Japanese stars, we want to keep the pressure off him and take things slowly to ensure we have a lot of success together in the future.”

Kozuki is delighted with how the last few months have progressed: “I feel right at home here at Schalke and am very grateful for the opportunity that the club has afforded me. I will continue to work hard on my development in order to help the team stay in the Bundesliga.”

In his 14 league appearances for the Royal Blues’ U-23s so far, Kozuki has provided eight goals and five assists. The Japanese attacker joined the Knappenschmiede academy from 1.FC Düren, where he played an important part in the Middle Rhine club’s promotion to the Regionalliga by contributing five goals and five assists in eleven games. Before making the move to Europe, Kozuki worked his way through the youth setup at Kyoto Sanga, while he has also already featured 12 times for his country at various youth levels.