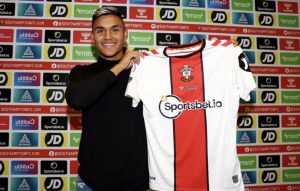 Southampton FC have confirmed it has completed the transfer of Argentinian midfielder Carlos Alcaraz from Racing Club.

Alcaraz, 20, has put pen to paper on a four-and-a-half-year contract at St Mary’s, becoming the second signing for the Men’s First Team this month, following on from the arrival of Croatia international winger Mislav Oršić last week.

A burgeoning talent in South America, the creative Alcaraz has risen to prominence while starring in his home country of Argentina over the past three years.

He made his debut for Racing Club at the age of 17, in January 2020, quickly establishing himself as a regular and going on to make a total of 83 appearances for the side.

Alcaraz, who is known as ‘Charly’, was a key part of the team that finished as runners-up in last year’s Primera División, only two points behind the mighty Boca Juniors, before he scored the winner in the subsequent Trofeo de Campeones final between the sides – the highlight of the 12 goals he has registered for Racing Club.

Southampton FC manager Nathan Jones said, “Charly’s arrival is another major addition for us. There has been a lot of interest around Europe, so it’s great to get him in and also to have done it quite early in the month.”

“He will give us a really exciting option and add a bit more creativity into the side, which is something that will be a real benefit to us.”

“I know how determined he is to get started and to help us, so we’re looking forward to getting to work with him and we’ll also make sure he has all the support needed to get settled in here.”

Carlos Alcaraz said, “I’m very happy to be becoming part of this club. I knew that it would be a new challenge for me and for my career, so I wanted to take that, knowing that I would be joining a great club.”