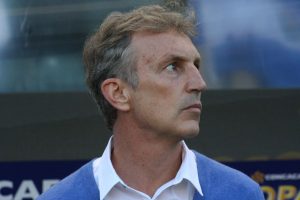 I-League champions Bengaluru FC have appointed Spaniard Albert Roca as the club’s new coach. The 53-year-old has signed a two-year deal that keeps him with the Blues till the end of the 2017/18 season.

Roca brings with him a wealth of coaching experience at the highest level having served as an assistant to Frank Rijkaard for five seasons at FC Barcelona (2003-2008) during which the Catalans won the Champions League once, the La Liga twice and the Spanish Super Cup twice before following the Dutchman in the same role to Turkish club Galatasaray (2009/10) and finally the Saudi Arabian national team (2011-2013). Roca’s last job was as manager of the El Salvador national team where he was in charge for a year.

As a player, Roca’s most notable stints were with Real Zaragoza and CE Sabadell FC in the La Liga apart from shifts with a number of clubs in the second division.

“We are very excited to announce Albert Roca as the new coach of Bengaluru FC. He is, what I would call, a major signing at the club. Albert has been with some of the best clubs in Europe as well as spent time in developing countries because of which he will have a great sense of the challenges India would bring,” said Bengaluru FC CEO Parth Jindal.

“We have had a very successful three years and Albert is only going to compound the efforts we have been making. He has also done some commendable work with young players in his career and that is absolutely in line with the philosophy of BFC where we are trying to develop players into stellar talent for the future,” he added.

Roca, a resident of Grannolers in Catalonia near Barcelona, said he was excited at the prospect of joining the Blues and was confident about playing the kind of football that the club and the supporters would be proud of.

“I’m very satisfied to have signed with Bengaluru FC. They are the champions of India, have fantastic supporters and most importantly, have a great support system and a management that is always hands on and wants to stay at the top. I want to assure our supporters that we will always give it our best. I want the supporters to be happy about the way we play,” said Roca.

The Blues coach is expected to land in Bengaluru in the fourth week of July.