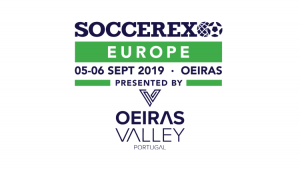 The two-day football business event is held in partnership with the Oeiras Municipality and the Portuguese Football Federation, and will see over 1500 industry figures gather to address the future of football in Europe.

Following the recent announcement of FPF as title partners, the federation has confirmed a number of its most senior staff will be a speaking at Soccerex Europe to share their expertise in a variety of business and sporting areas.

FPF President and UEFA Vice President, Fernando Gomes will be part of the opening ceremony addressing delegates and welcoming guests on behalf of Portuguese football.

FPF CEO, Tiago Craveiro, who has been such a driving force behind the federation’s success, will be giving an exclusive 1-2-1 interview to talk about their progressive approach to areas like infrastructure investment, education and business development, and how this has been reflected in the nation’s unprecedented success on the pitch, including their recent victory in the inaugural UEFA Nations – a tournament he was instrumental in creating.

Also speaking from FPF will be Nuno Santos, Channel Director of their new OTT service Eleven TV who will be speaking alongside Phil Lynch, CEO, Manchester United and a senior figure from LaLiga about the emergence of rights holders as media owners. Raul Faria, Head of Esports, FPF will be spearheading a discussion about the role of football in the maturing esports market.

The exciting growth of women’s football and the impact of the FIFA Women’s World Cup in France will also be one of the key discussions at the event and we are delighted to announce that Laura Georges, former French international and now Secretary General for the French Football Federation (FFF) will be speaking on our panel on the Rise of Women’s Football.

Jose Maria Cruz, CEO, Sevilla FC will be talking about the club’s commercial strategy as part of a C-level discussion on the modern club business model alongside Benfica Group CEO, Domingos Oliveira.

Understanding the needs of fans is key to all football business and Soccerex Europe will feature a presentation from COPA90’s Chief Business Officer, James Kirkham on their ground-breaking Modern Fan Report which, based on fan surveys and expert opinion, provides in-depth insight into how young fans think about and consume football.

The diverse and high level conference agenda for Soccerex Europe will also feature discussions on the anatomy of a winning team, featuring legendary French manager Gerard Houllier, and the changing transfer market with Portuguese football legend – and now CEO of his own agency D20 Sports – Deco and Dr Erkut Sogut, the agent of Mesut Özil.