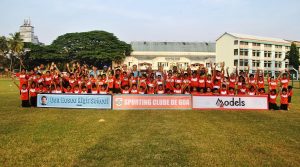 Sporting Clube de Goa in association with Don Bosco High School in Panaji inaugurated their ambitious Grassroots Program for the 2016/17 season on Friday at the Don Bosco ground in Panaji. The program was inaugurated by kicking a football to symbolise the genesis of 100’s of kids gathered in their shining orange armour. The inaugural ceremony was attended by Welvin Menezes Honorary Secretary, Chairman of Youth Development & Executive Committee Member of Goa Football Association (GFA), He was joined by his counterpart Anthony Pango – Head of Youth Development South Goa and & Executive Committee member of GFA.

Speaking on the occasion Fr. Avan Carvalho Principal of Don Bosco High School, mentioned how this program will make the young kids play, enjoy and understand the beautiful game at the same time helping them to stay fit and healthy. Fr Avin Carvallho also thanked Sporting Clube de Goa for this initiative and wished the young footballers all the very best.

The CEO of Sporting Clube de Goa Victor Fernandes mentioned the need for providing proper training and guidance for the kids to drive them towards the goal of developing raw talent at a very young age.

The General Secretary of Sporting Clube de Goa Edward Noronha said that the parents should take advantage of this inclusive program by Sporting and make the most of this one time opportunity. He also further thanked Don Bosco for the continues support and collaboration to make this program a success.

Sporting Goa’s Competition Director Angelo Albuquerque who was also instrumental behind the program said that to love any sports the kids have to enjoy the same and that’s what we try to do here at Sporting Goa.

This program has been a very important element of the club’s philosophy and every year the club aims at spreading the game further to more and more young kids. Sporting Clube de Goa unlike many others have a comprehensive approach towards this program. The kids have been divided into two age groups and will undergo proper training thrice a week on continues basis until the end of this season. As a build up to this program Sporting had also conducted an educational session for the parents of students enrolled in this program on Wednesday which covered aspects like nutrition and food habits of kids.