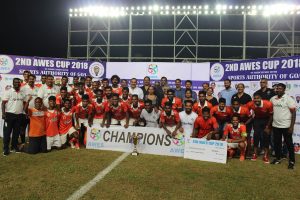 Sporting Clube de Goa scored a solitary goal victory over Salgaocar FC to emerge champions in the AWES Cup, organized by the Association for the Wellbeing of Elder Sportspersons in collaboration with the Sports Authority of Goa (SAG) at Tilak Maidan, Vasco on Saturday.

Clive Miranda’s late goal in the 86th minute proved to be the difference in the end as Sporting Clube de Goa lived up to their top billing to emerge champions.

Both teams started cagily, unwilling to take any risks at the start of the match. Sporting Clube de Goa did try to push forward but were mindful of the gaps at the back. Salgaocar FC, led by midfielder Mackroy Peixoto, created some chances but the teams lacked sharpness upfront.

The first chance for either side was in the 25th minute when Mackroy’s free-kick from the left missed the target narrowly.

At the other end, Sporting Clube de Goa were edging closer to the goal. One cross from the right by Brandon Gomes created confusion inside the Salgaocar FC danger zone but Cajetan Fernandes and Marcus Mascarenhas both clashed, missing the chance to test the goalkeeper. Then a corner kick from Cajetan saw Peter Carvalho rise highest and head only for the ball to be cleared on the goalline.

In the second half, Salgaocar FC missed another chance as a cross from Daniel Gomes saw Manuel Costa slow to react and Sporting Clube de Goa responded with a chance of their own as Victorino went close.

Just when it seemed the match would be decided by the tiebreaker, Sporting Clube de Goa scored. A corner from Assumption Soares was headed from inside a crowded goalmouth by Miranda for the only goal of the match.

Sporting Clube de Goa were reduced to 10 men late in the game as Quan Gomes was sent off for a second booking.

AWES president Avertano Furtado, Sporting Clube de Goa president Peter Vaz along with family members of those who had awards instituted in their names gave away the prizes.