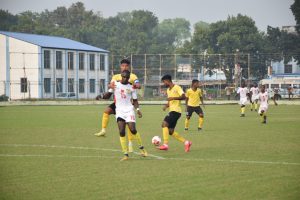 I-League newcomers Sreenidhi Deccan FC faced Southern Samity at the Kalyani Municipal Stadium today, which they went on to win 4-1.

The goals for Sreenidhi Deccan FC were scored by David Castaneda Munoz (13′,75′), Mc Malswanzuala (86′), and Lalromawia (90+3′), while Vishal Das had opened the scoring for Southern Samity.

Further Southern Samity weakened themselves with Nilshamudra Mondal getting a straight red and Jacksonkwabena Baffi with a double bookings.