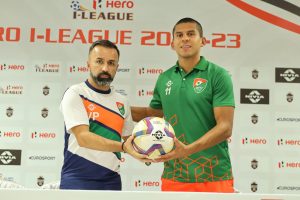 After suffering a narrow 1-2 defeat against RoundGlass Punjab FC in the opening round of the I-League 2022-23, Sreenidi Deccan FC are aiming to bounce back as they face Churchill Brothers at the GMC Athletic Stadium in Bambolim on Sunday, November 20 at 4:30pm IST.

“We are not happy with the result as I felt the team’s performance was good and we did not deserve to lose the game,” said Vaz Pinto. “It was the first game of the season and we controlled possession. We will improve as the season goes on.”

Churchill Brothers also lost in their opening game to Rajasthan United FC but Vaz Pinto insisted that Sreenidi Deccan FC would stick to their gameplan.

“We have a particular style of play and we only make small tweaks based on whom we are up against,” he said. “Churchill Brothers have a good coach and an organised team and I believe they will be in contention for the title this year.”

“We have to correct our mistakes from the defeat against RoundGlass Punjab and compete well against a Churchill Brothers side who will fight for the title,” said Castaneda. “They have the same head coach from last season so they will be familiar with his tactics so it will be a difficult game.”

The match will be telecast live on DD Sports, Eurosport India and the Discovery+ App.