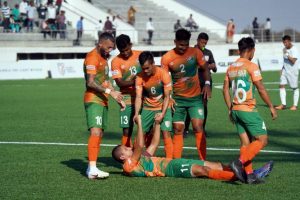 The I-League top-of-the-table clash ended up a one-sided affair as hosts Sreenidi Deccan FC recorded a 4-0 win against a hapless RoundGlass Punjab FC at the Deccan Arena in Hyderabad on Tuesday, January 17.

Sreenidi Deccan FC, who had surrendered top spot by losing to Rajasthan United FC last week, responded in sensational fashion, putting on their best performance of the season to hand RoundGlass Punjab FC only their second loss of the season.

Shahabaaz Khan scored when the two sides met back in November, and the full-back was on target again today, capitalising on an error from Kiran Chemjong to open the scoring in the 12th minute of the game. The goal was a result of a lapse in communication between RoundGlass Punjab FC captain Aleksandar Ignjatović and Chemjong, the latter’s failure to collect the ball handing Shahabaaz the goal on a platter.

RoundGlass Punjab FC’s full backs Naocha Singh and Khaiminthang Lhungdim managed to keep Sreenidi Deccan’s dynamic wingers quiet, but the hosts were rampant in the middle of the park, dominating the game with ease. Sreenidi Deccan scored their second by exploiting this weak centre, Mohamed Awal winning the ball in his own half before threading a 20-yard pass to David Castaneda through the RoundGlass Punjab FC midfield. The Colombian ran past Ignjatović and Deepak Devrani before shooting low on goal. His first attempt was saved by Chemjong, but the rebound fell kindly to Castaneda who tapped it into an empty net to score his tenth goal of the season.

RoundGlass Punjab FC started the second half better, but lacked a cutting edge in the final third. Sreenidi Deccan FC for their part were doing enough to keep them at bay. Castaneda forced a save out of Chemjong in the 61st minute, his shot from the edge of the area tipped over by the Nepal goalkeeper.

From the resultant corner Faysal Shayesteh whipped an inch-perfect ball for an unmarked Soraisham Dinesh Singh, who slotted a perfect header into the back of the net to give the Deccan Warriors their insurance goal.

The manner of Sreenidi Deccan’s dominance could be told from the fact that Ubaid C.K. didn’t have to make a save through the game. As RoundGlass Punjab FC’s heads slumped, Sreenidi Deccan pushed for more. In the 88th minute, Castaneda scored the best goal of the day. The striker collected the ball at the top of the box, turned, opened his body to let rip a shot into the bottom right of Chemjong’s goal. The goalkeeper could only watch it go in.

With the emphatic win Sreenidi Deccan FC lead the table by two points, albeit having played a game more than RoundGlass Punjab FC, who remain second.