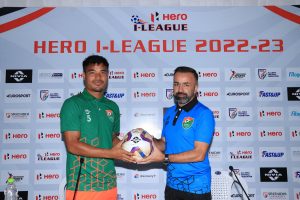 Sreenidi Deccan FC are aiming for their third consecutive win in the I-League as they take on two-time defending champions Gokulam Kerala FC at the Deccan Arena in Hyderabad on Sunday. Having beaten TRAU FC 1-0 in their previous encounter, the Deccan Warriors find themselves 4th in the standings and could go top of the table with a win.

Head Coach Carlos Vaz Pinto and defender Dinesh Singh addressed the media ahead of this big clash. Vaz Pinto was satisfied with his team’s d

“It was important for us to get our first clean sheet of the season having improved our defensive organisation,” he said. “Football can be up and down but we are working everyday to improve to keep the team at a good level.”

Defender Dinesh Singh is yet to start for Sreenidi Deccan FC this season but he feels ready to step in when called upon.

“We played well in the last game against TRAU and that has given us more confidence,” he said. “We feel prepared for the challenge of Gokulam Kerala and will try our best to get all three points.”

Gokulam Kerala are yet to concede a goal in the I-League this season but Sreenidi Deccan have scored the most number of goals so far. But Vaz Pinto believes it will not be as simple as attack versus defence.

“Gokulam Kerala have a certain style of playing and we should not forget that they are the two-time champions of the league,” he said. “It will be a challenge for us tomorrow as we are aiming for our third consecutive win. For that, we will need to be strong mentally and be competitive and focused.”

The match will kick off at 2pm IST.