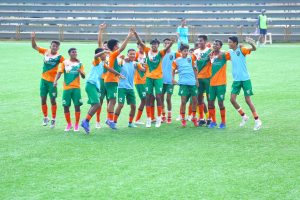 Sreenidi Deccan FC gave an impressive account of themselves in the U-17 Youth Cup after qualifying as winners of Group E which was held at the Deccan Arena in Hyderabad from December 23-31, 2022.

In their opening match, Sreenidi Deccan FC drew 1-1 with Mumbai City FC with Naveen Davarla scoring for the home side. The second game saw the young Deccan Warriors defeat Jeppiar IT FC 3-0 thanks to goals from Om Motghare, Samarth Diwani and Shaik Sadaan in a strong second half performance.

Sreenidi Deccan FC went from strength to strength as they trounced Silvassa United 4-0 in their third game with two goals each from Aiborlang and Kharon Subha. In the decisive final game of Group E, they overcame Gandhinagar FC 3-1 as Levis, Naveen and Samarth got on the scoresheet.

With 10 points from their four games, Sreenidi Deccan FC qualified as winners of Group E of the U-17 Youth Cup and will compete in the knockout stages which will be held later this month at a centralized venue.