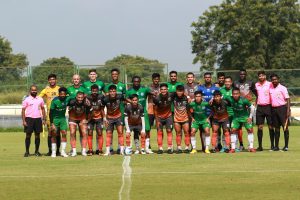 Jamshedpur FC faced their first pre-season defeat after a narrow 1-2 loss against I-League side Sreenidi Deccan FC today at Hyderabad. A last-minute penalty to the hosts costed the game.

After acquiring their second win against Tata Steel, the Men of Steel shifted their focus to the next pre-season fixture. The Jamshedpur squad traveled to Hyderabad for their first away game of the pre-season campaign.

Gaffer Aidy Boothroyd started with four foreigners, Peter Wellington Chima, and gave Harry Sawyer his first start with the Men of Steel. Jamshedpur FC broke the deadlock within the first 30 minutes of the game as Germanpreet Singh opened the Men of Steel’s account. Going into the lemon break the score remained 1-0.

Jamshedpur FC came up with multiple chances in the second half. But unfortunately, most of their attempts rattled off the post. Sreenidi Deccan FC got themselves back in the game in the final quarter. When David scored the equalizer in the 79the minute. Finally, the hosts were awarded a penalty in the last minutes of the game. And Ogana made no mistakes from the spot and found the back of the net to close the pre-season friendly in Sreenidi’s favor.

The match ended 2-1 as Jamshedpur FC faced their first pre-season loss. The Men of Steel will next travel to Goa for their upcoming friendly match against FC Goa which will be played on September 14, 2022.

In-action moments from our friendly against Sreenidi Deccan today 📸

Previous India U-17 go down to Nepal in SAFF U-17 Championship!
Next India Women’s Suren Chettri: We need to be more aggressive against Maldives!