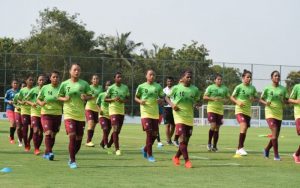 The AIFF developmental side Indian Arrows is all set to face SSB tomorrow in the Indian Women’s League at the 7th Battalion stadium in Bhubaneswar. Positioned third in the league table SSB Women FC will have a stern test-taking on the resilient Indian Arrows.

While facing Indian Arrows the Calcutta-based side eyes to reform themselves and bag a clean sheet. As head coach Juliet Miranda said, “For the next match, we have to get full points. We have to overcome our trend of conceding early silly goals and earn a clean sheet.”

Quizzed about her take on the next opponent Miranda said, “Our next opponent is also a tough team with lots of young blood. Most of the opponent players played together in U18 & U19 SAFF games”

“It won’t be an easy match. But we have to be better than them to get the full points,”she added.

Speaking about her team’s campaign so far Juliet said, “Right now it’s going on well, each and every match is crucial for us in order to reach our goal.”

When asked about the next match Indian Arrows gaffer Suren Chhetri said, “Technically, SSB is a good and experienced team. We are ready to face them. We’ll play the way we have played in the previous matches.”

While sharing his take on Indian Arrows’ campaign in the IWL Suren said, “Yes, so far we have seven points in four matches and there is a progression in the team in every match we have played. And the players are developing their technical and tactical knowledge.”

SSB will face Indian Arrows tomorrow, May 1 at 15:30h IST at the 7th Battalion Ground in Bhubaneswar.