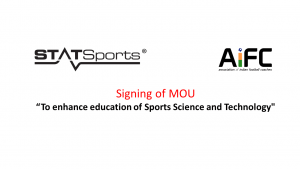 STATSports and the Association of Indian Football Coaches (AIFC) have joined forces to offer thousands of Indian coaches a new four Module/CPD Course Sports Technology Certificate in a drive to improve football in India.

The agreement was formed off the back of two hugely successful performance webinars held jointly by STATSports and the AIFC in which sport scientists from elite football leagues shared their wealth of knowledge with coaches from the AIFC and performance professionals from around the world.

The webinars led to advanced discussions between STATSports and the AIFC in which the UK-based sports technology group could create a sustained platform for Indian football coaches to learn from some of the most experienced and knowledgeable sport science practitioners currently working in football.

Football in India is growing at a rapid rate and STATSports Managing Director Paul McKernan was keen to emphasise the organisation’s desire to help aid the increase in professionalism, “It’s has been hugely exciting to see the exponential growth in footballing activity in India over the last several years. Alongside the AIFC, we felt there was a significant opportunity to aid and develop the knowledge of coaches here through our own industry expertise and contacts.”

STATSports co-founder and CCO, Sean O’Connor also spoke in glowing terms about the partnership, “The AIFC have done tremendous work in India, bringing a level of awareness and education that may not have been there previously. Our aim is to further the impact being made, providing coaches at all levels of the game with cutting edge sport science knowledge.”

AIFC founder-Director Dinesh Nair speaking on this partnership said, “Moving ahead with time includes upgrading, adopting changes and getting ready for the future. Formalising our relationship with STATSports will help us update and educate the coaching and support staff with sports science, data management and technology. The past two webinars with STATSports gave us insight and understanding on the latest practices across the world and we look forward to more going ahead.”

Derrick Pereira, AIFC Director and FC Goa TD further lauded this relation, “Having a partnership with STATSports is a valuable one as it can help our coaching staff understand the importance of using technology and how it can help better the performance too. Look forward to having many informative & educative sessions through this partnership.”

The Aston Villa fan group Villans Together caught-up with me, Arunava Chaudhuri, online to speak …