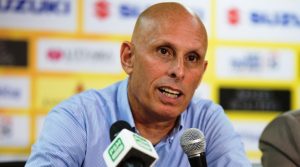 Former Indian national team head coach Stephen Constantine could be returning to India as he is in talks with East Bengal Club about coaching them in the 2022/23 season.

59 year old London-born Stephen Constantine has coached India twice, first between 2002 and 2005 and then he returned for a second stint from 2015 to 2019, which came to a tragic end as India were eliminated against Bahrain in the 2019 AFC Asian Cup after a last minute penalty in Sharjah and Stephen Constantine resigned at the post-match press conference.

Stephen Constantine has been linked with different Indian Super League sides in the past, but it now looks that he could return to coach a club side in India for the first time.

East Bengal Club are still to sign the final agreement with their new investors Emami Group, but the club management in the background has been working to build a strong squad having signed some players on pre-contracts while losing out on some other targets due to the ongoing situation at the club.

Meanwhile currently it looks that Stephen Constantine is the preferred head coach candidate of the club management, who have had contacted other coaches like former Mumbai City FC head coach Jorge Costa.

Now one will have to wait to see if Stephen Constantine is appointed as East Bengal Club head coach in the coming days or if the club management has a change of thought and brings in a different head coach.