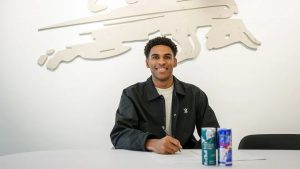 Teenage Sanoussy Ba, an RB Leipzig academy product, has signed his first professional contract running for two and a half years.

The 18-year-old has been part of the first team since the start of this season.

Sanou joined RB Leipzig aged 12 from SpVgg Bayern Hof in summer 2016. Since then, he has played for all the club’s academy sides up until the Under-19s.

The versatile winger appeared for the first team for the first time this season, initially featuring in the friendly against Liverpool FC. He then played his first competitive games against Ottensen and Hamburger SV in the DFB-Pokal, as well as in the Bundesliga away game at TSG 1899 Hoffenheim.

Ba was also on the bench for the UEFA Champions League game against Celtic Glasgow and played six times for the U-19s in the UEFA Youth League this term. The right-footed youngster has scored three goals and registered one assist in 20 games for the club’s U-19s.

Sanoussy Ba said, “I’m really proud to have signed my first professional contract, it’s a great sign of faith in me from the club. I feel right at home here at RB Leipzig and I’m improving each day I’m here. I’ve made the step up to the first team this season and played my first minutes in the DFB-Pokal and the Bundesliga. That shows that I’m on the right track, but I have to continue working hard to remain in the first team. That’s my biggest goal and I will do all I can to achieve it.”

RB Leipzig head coach Marco Rose said, “Sanoussy is a good and talented lad. I enjoy working with him. He’s incredibly dynamic, is two-footed and versatile too. I’m pleased for him.”