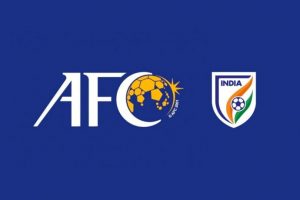 The Asian Football Confederation (AFC) has fined the All India Football Federation (AIFF) for spectator invasion during its national team’s 2023 AFC Asian Cup qualifying matches against Afghanistan and Hong Kong in Kolkata in June 2022.

But, the bulk of the amount, 13,500 USD, is a suspended fine to be paid in case of repeat offence within the next two years. The AFC Disciplinary and Ethics Committee imposed a fine of 8,000 USD on the AIFF after one home spectator invaded India team’s technical bench, a restricted area, during the match against Afghanistan.

The AFC’s Disciplinary and Ethics Committee considered the fan invasion as “an act of improper conduct” on the part of the AIFF. It said India failed to fulfil its obligations on two counts of “take every safety precaution demanded by the circumstances during the match” and “ensure that law and order was maintained in the stadium and its immediate surroundings”.

“AIFF is ordered to pay a fine of USD 3,000 for violating Art. 65.1 of the AFC Disciplinary and Ethics Code … USD 2,250 of the amount … is suspended for a probationary period of two years,” the ruling said relating to the first part of the offence.

“Should another violation of a similar nature occur within the probationary period, the suspension is automatically revoked, and the sanction applied; it is added to the sanction pronounced for the new infringement.” The AFC said the unsuspended portion of the fine – 750 USD – shall be settled within 90 days from the date of the communication of the decision.

For the second part of the offence, the AFC committee ordered the AIFF to pay a fine of 5,000 USD out of which 3,750 USD is suspended for a probationary period of two years.

The unsuspended portion of the fine – 1250 USD – shall be settled within 90 days from the date of decision.

On June 14 again, two Indian spectators invaded the field of play and the home team’s technical bench, a restricted area, during the match against Hong Kong, which was deemed “an act of improper conduct” on the part of the AIFF.

The AFC’s Disciplinary and Ethics Committee fined the AIFF 5000 USD each for the two parts of the offence, out of which 3750 USD each were suspended for a probationary period of two years just like in case of the match against Afghanistan.

India had beaten Cambodia, Afghanistan and Hong Kong to qualify for the 2023 AFC Asian Cup.