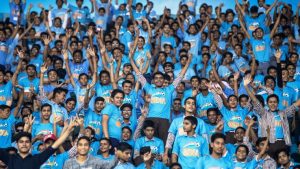 As 2017 slowly comes to a close, I, Arunava Chaudhuri (arunfoot) take a look back at the year gone by in Indian football in a series of write-ups on what all happened across the calendar year 2017 including the highlights, the good and the bad, and finally the outlook into the year 2018.

To start off with a lot happened in Indian football like never before. I had said and written that 2017 could become a defining year for Indian football especially with the 2017 FIFA U-17 World Cup set to be played in India in October 2017 besides the issue of the Indian Super League/I-League merger in professional Indian club football set to be decided.

I have to start in October 2017, the first-ever FIFA World Cup on Indian soil, the 2017 FIFA U-17 World Cup. I honestly had my doubts if India could and would pull it off as things looked difficult six months ahead of the tournament, even in July 2017 I felt, there is a lot to be done, but in the end the LOC (Local Organising Committee) of the 2017 FIFA U-17 World Cup did a brilliant job to pull off a sensational tournament. Especially Javier Ceppi and Joy Bhattacharjya as the leaders and heads of the LOC need to be complimented as well as the AIFF, the Government of India, the six state government besides all the volunteers and professionals, who put it all together.

Further the India Under-17s gave their everything and got massive support from the crowds present and the whole nation despite losing their matches to the USA, Colombia and Ghana. Now the boys are fighting it out against men in the I-League.

The fairytale, the dream run or whatever you want to call it. Aizawl FC winning the I-League is one of the biggest upsets in international professional club football much much bigger than Leicester City FC winning the English Premier League. The Reds from Mizoram pulled off a sensational run by lifting the trophy ahead of famed opposition like Mohun Bagan, Bengaluru FC and East Bengal.

It was an incredible feat for Aizawl FC achieved under head coach Khalid Jamil, whom many regarded as a failed coach after his years with Mumbai FC, but the stint with Aizawl FC changed the perception about him and his coaching.

But the success of Aizawl FC also marked the rise and continued hard work in football across the tiny state of Mizoram in India’s NorthEast!

A high of 96 in the FIFA World Rankings, qualification for the 2019 AFC Asian Cup and 13 matches unbeaten, it has been an impressive year for the Indian national football team under head coach Stephen Constantine. For that the credit goes to the coach, his staff and the players!

Now planning for the 2018 FIFA match dates and the 2019 AFC Asian Cup in the United Arab Emirates will be the key as India will have to prove itself in the international arena against tougher and bigger opposition.

Many expected that the issues surrounding the merger of the Indian Super League and I-League would be solved in 2017 with Bengaluru FC, Mohun Bagan and East Bengal besides an expansion franchise playing in a revamped 12 team Indian Super League. That in the end did not happen with only Bengaluru FC making the switch and the TATA Group creating Jamshedpur FC, while East Bengal and Mohun Bagan continue to play in the I-League.

Will the merger happen in 2018? We will have to wait and watch…

Many experts and ex-footbalelrs have said that playing the Indian Super League and I-League in parallel would not be an issue, it would rather be a chance to develop new talent and allow many more footballers to play at the top level. A novel idea, but having watched a number of games across both leagues, I have to clearly state, India at the moment does not have the talent to accommodate 20 teams in two parallel running leagues at the top level.

We have overstretched the talent pool by quite a bit and people should openly say it.

The issue of kick off timings between Indian Super League and I-League being divided as 2pm and 5.30pm mainly I-League and 8pm for ISL was according to me expected. IMG-R alongwith Star Sports have spend quite a bit of money, time and effort in creating the marketing platform of the ISL, while the I-League has been struggling for over a decade despite the stories of Aizawl FC and other clubs succeeding or getting promoted into the I-League.

It will be interesting to see how all these above issues will be sorted in the short- and medium-term.

Women’s Football in India got a big shot in the arm with the launch of the inaugural Indian Women’s League in January 2017. It was a start for women’s club football across India despite the shortcomings in the format due to financial constraints for the AIFF.

It is one area were the AIFF have done a commendable job over the last few years. After the launch of the U-18 I-League (now called U-18 Youth League) a few years ago, then followed by the U-15 Youth League and this season of the U-13 Youth League, at the top regional and national level, you have competition across India. Now in the coming years it needs to spread, become more and more competitive and lower divisions to spread the teams out according to their level of football, so that the kids do not lose interest due to heavy losses and we lose talented footballers.

This is an area where the AIFF and the state associations needs to lay more focus. We are getting a lot of people with coaching degrees, but there is no real quality check as quantity is more important than quality as I have seen across my various trips across India.

We need better quality coaches to develop higher quality footballers for Indian football to be successful at the international level.

I hope you enjoyed this opening part of the series! The next one is to follow…