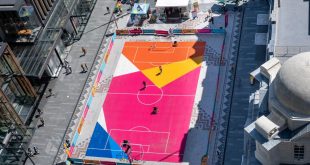 The young Tongan side that competed at this month’s OFC U-17 Championship 2023 may have been knocked out in the quarterfinals, but have scored a major victory for the TFA’s Just Play program.

“I feel proud and excited,” he said.

“Rugby is our first sport in Tonga. But since Just Play was introduced, boys and girls have been really into the programme.”

Just Play was the way members of the current Tongan U-17 side, along with many others, would have kicked a football for the first time.

“I had four kids from the village where I’m living now, they had never played football before. Now those four players are in this team. I started a whole new club in the village using the Just Play program.

“Some of the kids have come to the club come from situations with social challenges. Once they joined Just Play, there was no more stealing or dropping out of school. They are really excited they’ve got some incentives through sport.”

With the opportunity to travel and represent their country comes responsibility, which Lafaele feels Just Play has set the young players up for.

“They have to be good ambassadors,” he said, stressing that team management rules are always followed and standards of behaviour upheld.

It is hoped that this group of U-17 players will continue on to one day represent Tonga at senior level. Lafaele is confident that one day we’ll see them on the big stage:

“I think the process is going really well, just like our U-19 team. Many are playing in our premier division and are the backbones of those teams. The pathway is there.”

ABOUT JUST PLAY: ‘Just Play’ is designed for children aged 6-12 and is based around structured activity programmes as well as the distribution of equipment packs containing balls, cones, bibs, activity manuals and other resources that enable children to play football at any time and in any situation.