Top marks for FIFA Football For Schools in 2022! 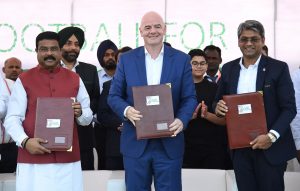 Designed to make football more accessible to youngsters by incorporating football activities into the education system, Football For Schools aims to promote the development and empowerment of close to 700 million children around the world. That represents a vast undertaking, but F4S spares no effort in its work. In fact, this year the programme was able to pride itself on expanding its reach to every continent.

To date, 32 of FIFA’s 211 member associations have successfully implemented Football For Schools. Until recently, Oceania remained beyond its scope, but that all changed in October, when FIFA Legend Yakubu Ayegbeni was on hand in Polynesia to witness the programme’s local launch.

“FIFA has been developing Football For Schools for almost two years, but unfortunately, due to the pandemic, it was only able to resume its activities towards the end of 2021,” explained FIFA’s Football For Schools consultant, Antonio Buenano Sanchez, during the event. “Tonga was the first member association in the Pacific region to implement the programme.”

Before Tonga, several other member associations joined the movement in 2022, including Paraguay in South America, Belize and Costa Rica in North America, France in Europe, Djibouti and Côte d’Ivoire in Africa, and Guam and Indonesia in Asia. In total, 23 Football For Schools activities were organised across the globe and 54 member associations received preliminary training at one of five regional seminars.

“This programme embodies the vision of FIFA; its President, Gianni Infantino; and its Secretary General, Fatma Samoura – namely, the goal of making football truly global,” said Football For Schools director Fatimata Sidibe, who joined FIFA after 25 years at the United Nations. “The hope is for every child in the world, across the 211 member associations, to be able to play football, and to be able to do it while learning and gaining life skills.

“F4S brings the positive values of football to the process of education and development of our children, while ensuring a positive and enthusiastic attitude,” she added. “It challenges children in a fun and playful way, and gives them the means to make their own decisions and assume responsibility in a receptive and favourable environment.”

Overall, 632,830 footballs have been distributed as part of the programme, benefiting more than 5.3 million children (62 per cent male, 38 per cent female). In addition to Yakubu Ayegbeni, several other stars of the game have taken part in activities too. For example, 1998 FIFA World Cup™ winner Youri Djorkaeff and Cha Bumkun – Korea Republic’s all-time record scorer – were present for an event in Mongolia. And, in Guyana, attendees included former Colombia goalkeeper Faryd Mondragon, a veteran of three World Cups, and Rosana dos Santos Augusto, who represented Brazil at four editions of the FIFA Women’s World Cup™.

“As well as reflecting the global perspective of FIFA and its President, Gianni Infantino, the Football For Schools project also shows us that we must vary teaching methods to adapt to the needs of every group and each individual,” said the FIFA Foundation’s chief executive, Youri Djorkaeff, during the launch of the first African Football For Schools project in Mauritania. “To get hearts beating for football, football needs to be at the heart of everything we do.”

The year 2022 drew to a perfect close for F4S as it set up shop in Qatar for the World Cup, with the 3-2-1 Qatar Olympic and Sports Museum in Doha handing the programme its own exhibition space. Swiss FIFA Legends Valon Behrami and Alain Sutter went along to share their experiences, while Antonio Buenano Sanchez concluded by reflecting: “Is there a better moment than a World Cup to show that Football For Schools is a project devised by FIFA to reach its 211 member associations and make football truly global?”

“2022 has been a pivotal year for the project after the COVID crisis and FIFA’s internal reorganisation,” added Fatima Sidibe. “Our main focus was placed on spreading knowledge of the F4S programme among member associations, on new partnerships both internal and external, and on the development of human resources. 2023 will be a year of consolidating gains, strengthening the system of monitoring and evaluation, and creating links with FIFA Forward.”