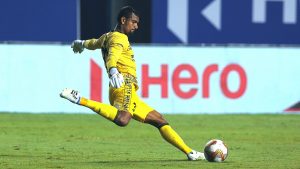 Head Coach Owen Coyle’s era at Jamshedpur FC began with a string of positive developments and new signings. One of his key additions to the squad was goalkeeper TP Rehenesh. The Kerala-born shot-stopper was one of the best performers, not just for the club, but also in Indian Super League (ISL) 2020-21.

Last week, via an online poll conducted on Jamshedpur FC’s social media handles, TP Rehenesh beat another fan favourite, Stephen Eze, to be elected as Jamshedpur FC’s Fans’ Player of the Season for 2020-21. Content with this accolade, Rehenesh with his hearty smile, happily received the award and shared a message directed to the fans.

“Thank you so much for selecting me as your Fans’ Player of the Season. I am really glad my performance meant a lot to you. Sending lots of love and once again thank you for choosing me. Hopefully, we’ll come back with an even better performance in the next season.”

The man between the sticks made a dominating presence in the goal for Jamshedpur FC and also competed in the race for the Golden Glove award alongside Arindam Bhattacharja and Amrinder Singh. With only 89.11 minutes per goal conceded, Rehenesh was a complete miser between the sticks. He closed the season on a strong note as he finished third in the Golden Glove award race. Rehenesh also dominated the clean sheet table with eight clean sheets in the 19 games he appeared in for Jamshedpur FC, and finished third again in the ‘most clean sheets’ list this season.

Rehenesh registered some solid statistical figures in his first season at Jamshedpur FC and established himself as a regular starter at goal for the squad. In the 1.693 minutes that he was on the field, he faced a total of 176 shots out of which 73 were on target. Out of the 73 shots on target, Rehenesh successfully managed to keep out 54 of those shots from hitting the net with a stunning save percentage of 73.97%. With an average of one goal conceded per game, Rehenesh conceded 19 goals in the 19 games he played in.