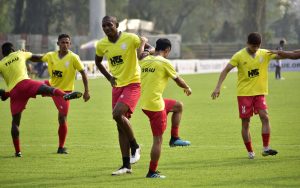 After back-to-back wins in their last two matches, TRAU finds themselves in the chasing pack for the I-League trophy as they are placed third — with 22 points — despite being level on points with Gokulam Kerala FC. They are three points behind league leaders Churchill Brothers and would be gunning for no less than three points against Round Glass Punjab FC.

The match will kick-off at 4pm IST at the Kalyani Municipal Stadium tomorrow, March 15 and will be broadcasted on the 1Sports channel, whilst being streamed live on their Facebook page.

TRAU will hope to return the favour from the previous encounter between the two sides where they lost 2-0 thanks to goals from Chencho Gyeltshen. RG Punjab FC secured an easy victory last time around but this time, they will be aware that it won’t be easy. The goal-scoring form of Bidyashagar Singh is something that will surely be a topic of discussion in the Punjab camp. Komron Tursunov is another name that the Punjab defence will have to take care of, with his constant link-up play with the highest goalscorer of the league causing havoc for opposing teams throughout the course of the season.

TRAU are riding on high spirits after Bidyashagar Singh scored his second consecutive hat-trick to help them cruise past Real Kashmir 3-1 in the previous match week. A win for TRAU can make things interesting in the league if Churchill Brothers drop points. Regardless, even if both teams win, it could set up for an interesting finale in the remaining two matches of the season.

Speaking at the official pre-match press conference, head coach Nandakumar Singh said, “I am very excited about how our boys are improving and especially Bidyashagar. I have no words to describe the excitement that the performances of my team have given me and I am lucky to coach such talented players in my team.”

“I have never seen such good communication between Tursunov and Bidyashagar. In the earlier stage, there was some misunderstanding but they have improved a lot. It is a very good combination between the two.”

“Truly speaking, the level of performance that I am getting from the boys is satisfying for me. I never believed we could put in such performances and get such results but God has been helping us. It is very much important to win the next match. I am focused on the next match and I am thinking about the title. Our next match is very important for the title race.”

I-League’s highest goal scorer Bidyashagar Singh said, “I am very lucky to be playing with Komron Tursunov, he is a very intelligent player. I am happy to be scoring so many goals. I don’t think about hattricks but I want to do my best and score goals.”

RoundGlass Punjab FC will look to bounce back to winning ways after a disappointing 3-3 draw against Mohammedan SC. RG Punjab FC had a two-goal lead that they blew and were on the cusp of defeat. But, an 88th-minute goal by Ashish Jha helped them claim a point. They will have to hope for a miracle if they are to fight for the league title but one thing that they can do is win all of their remaining matches and be in contention.

Speaking at the official press conference, head coach Curtis Fleming said, “We scored three goals against Mohammedan. We were very, very attacking. In the end, we had six attacking players on the pitch trying to win the match. We were frustrated, to be honest as we only had four matches left. We were thinking about where we would have been with the three points. We take the positive that we didn’t lose the game.”

“He has done very well to score two back-to-back hat-tricks. A team can’t score goals without everything coming together. Strikers do get the plaudits but it is the entire team that makes or creates chances for them,” added Fleming when asked about Bidyashagar Singh.

Ashish Jha, who was also present at the press conference said, “I am proud of my performance in the last match. I have been waiting for my chance, I got a few chances earlier and I missed a few opportunities. I have worked hard in training and I am happy with my goal in the last match.”