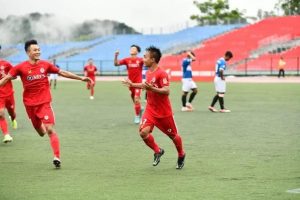 Defending MPL champions Aizawl FC had to come back after a goal down yet again in a 2-1 win against FC Bethlehem in round 2.

The four time champions were caught out early in the first half as Lalruatpuia burst to latch on and finish a ball over the top from his midfield.

Aizawl FC got their equaliser on the half hour mark through captain Lalchhawnkima. The experienced Kimkima was left unmarked as he applied the finishing touches to a fine delivery from the right by Lalbiakzuala.

The winner came from another experienced campaigner in Aizawl FC’s ranks when MS Dawngliana scored from a cleverly dinked finish on the 72nd minute.

FC Bethlehem will face Chanmari FC on Thursday noon in the next fixture.