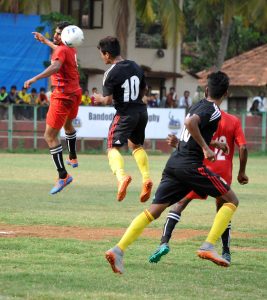 Pune FC rallied from a goal down to hold Churchill Brothers SC 1-1 draw in the Bandodkar Gold Trophy football tournament at the Rosary Ground, Navelim on Friday.

Both the teams adopted aggressive approach and kept the crowds on their toes. However it was Churchill Brothers who surged ahead in the very 4th minute when striker Aldrich Coelho rasping shot beat rival Pune FC Goalkeeper Anus Kumar hands down off a well measured cross from Mathew Colaco.

Stung by that setback, Pune FC regrouped quickly and took the fight to the rival camp and neutralized the lead in the 13th minute when a rival defender fouled Pune FC player outside the box and the Referee awarded a free-kick, which was taken by Buvanthankhun Samte and it gave no chance to the Churchill Brothers goalkeeper Aliston Fernandes to put his team on equal terms midway in the opening session.

Churchill Brothers went into an attacking mode and had a chance to make it 2-1 but Mathew Colaco shot wide.

At the other hand, Pune FC did not leg behind and troubled their rival defence with well-orchestrated raids but striker Lalawmpuia ballooned over from close range. Pune FC were the better side after the break but the winner eluded them.

PFC had better share of exchanges and also ball possession. Pune FC had a golden chance to make it 2-1 but striker Lalawmpuia’s thump header miss the mark narrowly off a well executed free-kick taken by Mohammed Yasir in the 58th minute. Lalawmpuia pulled the trigger outside the box which his left footed drive which slipped through the hands of Churchill Brothers goalkeeper Aliston and the ball travel it to Vanlalhruaitluvanha who made a brilliant attempt but the keeper Aliston came to his sides rescue and thwarted him from scoring.

Earlier Pune FC’s Murang Wungngayam was red carded by Referee Tejas Nagvenkar after he picked-up his second yellow card. The red card did not deter Pune FC as they launched a barrage of attacks and Ashique Kuruniyan who was a thorn in the rival defence came twice in dismantling the rival citadel but his tries either missed the target or shot straight into the safe hands of the Churchill Brothers keeper. The home team came close in scoring the match winner when Cyrus Noronha’s snap shot was well blocked by Pune FC Goalkeeper Anus Kumar.

With time running out, Pune FC went all out in search of the match winner and nearly struck by man of the match Ashique Kurunian but his try from close range went wide off a pass from Sajid Hussain. Thereafter PFC nearly scored the match winner but Rajat Kumar’s header hit the crossbar off Omega Vamlalhruaitluvana’s free-kick. Earlier Churchill Brothers Sanwil D’Costa was also ejected by referee for a second bookable offence.

@Arunfoot
Previous Video replay technology on show at IFAB kick-off workshop!
Next VIDEO – New Balance: Watch the action from the launch of the new Furon & the new colour Visaro!