UEFA EURO 2020 games in Munich to be held with spectators! 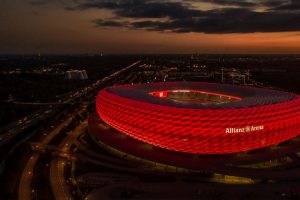 The UEFA EURO 2020 games at the Munich Arena can take place in front of spectators. This decision was reached by the Bavarian state government and communicated by minister president Markus Söder, who spoke of a capactiy “up to 20 percent”, after a cabinet meeting on Friday. The planned ‘Lead Scenario’ will allow approximately 14,500 spectators per game.

Munich is a host city for three group stage games and one quarterfinal at the EUROS. On Tuesday, June 15 at 21:00 CEST, the Germany national team will take on world champions France. The following Saturday (June 19 at 18:00 CEST), Löw’s men face European champions Portugal before the final group game on Wednesday, June 23 at 21:00 CEST against Hungary. On Friday, July 2 at 21:00 CEST, one of the four quarterfinal ties will also take place in Munich, in addition to Germany’s three games in Group F.

Dr Rainer Koch, first vice president of the DFB and president of the Bavarian Football Association (BFV) said, “The decision to allow a limited and, in my view – given the current situation, absolutely appropriate number of spectators in Munich is in many ways a positive signal for everyone in our country. The longing for a step-by-step return to more normality and thus more joy in life has been enormous, especially in the past days and weeks with a falling infection rate. The European Championship in Munich with fans in the stands will further raise the spirits in this country and it should make us all aware that we can take further steps with caution and careful consideration even in times of the pandemic. We can live with the pandemic without having to shut down social life altogether. That was everyone’s hope from the beginning. We’ve fought for this and have carefully weighed up what is possible in line with health protection measures. I am sure that football can open the door up to other areas of life with a major sporting event like the EUROS – especially for the millions of people playing sport at amateur and hobby level.”

Heike Ullrich, DFB deputy general secretary, said, “I am delighted that we’ve received the final go ahead from the government and the authorities to allow spectators at the EURO host arena in Munich. With around 14,000 spectators permitted, we can welcome a significant amount of fans to Munich. A special thank you from us to all those involved and all the institutions who accompanied us on this path. It is a strong signal to the football family. The now concrete easing of restrictions are also a powerful sign to the world of amateur sport, but also to gastronomy and other cultural institutions. Finally being able to play football, on the amateur pitches as well as the professional ones: This will give not only the fans something to look forward to at the EUROS, but also the players themselves, and of course the amateur footballers.”

Philipp Lahm, managing director of the DFB EURO GmbH and honorary citizen of Munich, said, “The decision of the Bavarian state government to allow 20 percent capacity in Munich is a sign that there is a way back to normality and that the country is getting the pandemic more under control. The seven-day average infection rate per 100,000 people in Bavaira is under 30, which makes it possible to return to active life. It is of vital importance to sport, cultural institutions and gastronomy that fun, joy and quality of life return with the appropriate hygiene measures in place. This is an achievement for us all. Personally, I am very-much looking forward to the games at the Munich Arena.”

Mayor of Munich, Dieter Reiter, said, “I am pleased that it has now finally been settled that the EURO games in Munich can take place with spectators in the stadium. For all those involved, an earlier decision would nonetheless have been helpful. Of course, the safety and wellbeing of the population is my top priority. But the infection rate, which has now been stable for several weeks, means it is possible, after thorough consideration of the risks, for teams and spectators to experience real live atmospheres once again. Now I hope for myself and for all of us, that with the support of the crowds in the Munich Arena, we can witness a successful European championship campaign for Germany.”