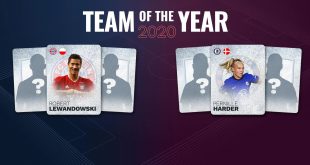 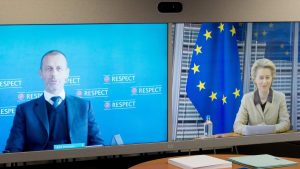 In a virtual meeting with European Commission President Ursula von der Leyen, the UEFA President Aleksander Ceferin on Thursday, December 3 committed UEFA’s full support to the European Green Deal, and underlined that European football stands alongside the European Commission on climate action. UEFA will join the European Climate Pact, set to be launched later this month by the Commission, by making its own commitments to the green transition. It will also help raise awareness of the call to action in the European Green Deal, and mobilise more actors in moving towards Europe’s goal of being the first climate neutral continent by 2050.

The Presidents’ meeting also emphasised the urgent need for Europe to be prepared and build public trust to ensure effective coronavirus vaccine deployment. UEFA and the European Commission will coordinate on communications around coronavirus vaccination safety and deployment, using football’s power to mobilise role models and reach citizens.

The UEFA European Championship next summer is a symbol of hope on the horizon for Europe, as well as a celebration of 60 years of the EURO tournament. This EURO for Europe will highlight joint European Commission and UEFA actions to promote objectives of common interest such as social inclusion, integration and sustainability. The meeting was an opportunity for UEFA to raise the importance of protecting the fundamental aspects of the European model of sport, as well as to discuss the power of European football and sport to promote positive change, European solidarity and values

Mr Ceferin said, “UEFA shares the vision of the European Green Deal, and we are committing to it as stewards of the most popular sport in Europe. UEFA’s long-term model for European football, based on financial solidarity and values, is perfectly aligned with the European Commission’s vision for inclusive recovery and sustainability. We are a powerful team, and I look forward to strengthening our partnership in the coming years. We must protect our European model of sport for the next generation.”

President von der Leyen said, “It was a pleasure to meet with President Ceferin to discuss partnership between UEFA and the European Commission on the European Green Deal, vaccinations and much more. It is great to have UEFA on board to kick-off the European Climate Pact soon. Let’s work together to give COVID-19 the red card, so that stadiums can soon be full of fans, and our local parks and pitches full of joy.”