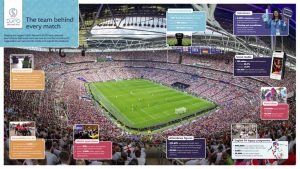 UEFA Women’s EURO 2022 brought unprecedented interest in the tournament with record stadium attendances, huge numbers of TV viewers and fans following the action online like never before. With the Legacy Programme in full swing in England, the tournament will also have an impact for many years to come.

UEFA, alongside The Football Association, the Local Organising Structure and tournament stakeholders including the host cities and several partners, delivered the framework for an unforgettable event. Below are some figures to illustrate the success of the tournament.

UEFA Women’s EURO 2022 was shown worldwide via more than 60 broadcast partners and additionally via UEFA.tv in selected territories. More than 50 broadcast partners covered matches with dedicated on-site productions – more than double the 2017 edition at almost every stage of the competition.

• The tournament became the most watched Women’s EURO ever, with a projected global cumulative live viewership of 365 million across TV, out-of-home viewing and streaming

• The final between England and Germany is projected to have attained a cumulative live viewership of 50 million worldwide, over three times more than for the 2017 final, when 15 million viewers tuned in