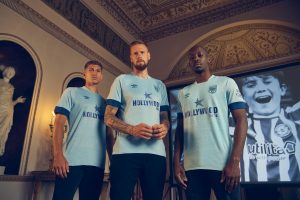 The new Brentford FC kit has been revealed. The light blue design, reminiscent of Brentford FC’s away kits from the ’80s and early ’90s, feature an embroidered castle crest and will be the second kit in as many years that will be rolled over for two seasons.

The castle crest was introduced in 1975 as a celebration of ‘the fortress’ Griffin Park, when, in the 1929/30 season, the Club went on a record-breaking run of 21 home wins. It was used by the Club for 18 seasons from 1975/76 to 1992/93. It has been reintroduced to the new kit for this two-year cycle, representing the fortress which our fans help us to build away from home.

With its stylish design and comfort, Brentford FC believe it will please the fans as much off the pitch as it will the players on it. It also features ribbed cuffs and collar, signed off on the inside with ‘Bee Together’, our message of inclusivity and our Bee symbol printed on the neck.

Jon Varney, Chief Executive of Brentford FC, said, “The castle badge holds a special place in many of our fans’ hearts and this kit gives us the chance to celebrate a period in our history while acknowledging the impact that our fans’ support gives Thomas and the team, particularly away from home.”

“We took the unusual decision last season to roll our home kit over for two seasons, offering more value to our fans and helping to reduce our carbon impact by extending the kit’s lifespan. The feedback from our supporters, and beyond, was overwhelmingly positive so we’ve decided to take the same approach for the new second kit.”

“We know we have more to do to step up our sustainability efforts across the Club but feel that this simple step will encourage others to think differently and consider other ways to reduce their own impact on the planet.2

Fans should note that, based on current sponsor contracts and possible regulatory changes, the sponsors on the kit may be subject to change for season 2023/24.

Utilita’s branding will continue to feature on the Brentford FC Women’s First Team, Women’s B Team and Academy match kits, along with all junior replica kits for this season.