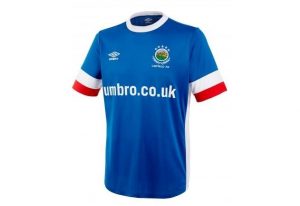 Returning to a club with which UMBRO share a strong history, UMBRO are excited to unveil the new Linfield FC 2016/17 home shirt.

The first fruits of a new five-year deal with Northern Ireland’s most successful club, the new home shirt will be worn by the Blues as they battle for another title to add to the 51 they already hold!

Northern Ireland’s most successful club, Linfield have won the national league title a remarkable 51 times, and have lifted the Irish Cup on 42 occasions. Many of these past moments of success came in UMBRO kits – including the famous Clean Sweep quadruple season in 2006.