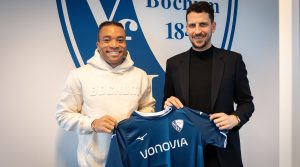 VfL Bochum 1848 are welcoming another new signing in Pierre Kunde Malong who joins the Blue and Whites on loan. VfL Bochum and his parent club Olympiakos have agreed that the deal will last until June 30, 2023.

The loan of the Cameroonian international (35 appearances) also includes an option to buy. For the 27-year-old midfielder, it is a return to the Bundesliga. Pierre Kunde already played for 1.FSV Mainz 05 in the German top flight from 2018 to 2021, scoring four goals in 68 games. He won the Greek championship with Olympiakos in 2022.

Patrick Fabian, Director of Sport at VfL Bochum 1848, is delighted that “the transfer could be done before our departure for the training camp. Pierre Kunde Malong is an asset to our team due to his technical and tactical skills as well as his dynamism and robustness. In addition to his international experience, the fact that he knows the Bundesliga and has already successfully fought with Mainz to stay in the league are further good signs that speak for him and his loan. We now want to introduce Pierre to the team as quickly as possible, and the training camp is ideal for that.”

Pierre Kunde Malong was born in Limbé in Cameroon. His first step into football was with local side Best Stars and then he moved to Europe at the age of 16. He reached Atlético Madrid via Alcobendas CF. For the “Colchoneros”, he progressed through the U19s and second teams, before being loaned to Extremadura and CF Granada. After that he joined Mainz 05 in 2018. He has played twice for the Cameroon national team at the African Cup of Nations (2019 and 2022) and was part of the 2022 FIFA World Cup squad where he featured in the group matches against Serbia and Brazil.