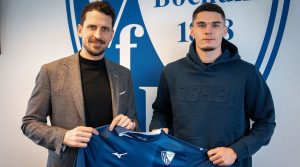 VfL Bochum 1848 has signed a new attacker as Moritz Broschinski joins from Borussia Dortmund, where he played for the Under-23s in the 3.Liga.

The 22-year-old was born in Finsterwalde and trained as a footballer with FC Energie Cottbus. With the Lusatians, he won the championship in the Northeast Regional League (Regionalliga Nordost) and the Brandenburg State Cup. After moving to BVB, he celebrated the championship in the Regionalliga West in his first season with Dortmund’s second team, which meant promotion to the 3rd division. He signed a contract with VfL that runs until June 30, 2026. Both clubs agreed not to disclose the amount of the transfer fee.

“Moritz Broschinski is a highly talented striker who has already proven his qualities at Cottbus and Dortmund in his younger years,” said Patrick Fabian, Director of Sport at VfL Bochum 1848. “He has a great mentality and has all the footballing and athletic qualities to take the next step in the Bundesliga. We are convinced that he will succeed with us and that we will have a lot of fun with him in the future.”

“Of course, even as a child you dream of playing in the Bundesliga one day,” says Moritz Broschinski, looking forward to the new challenge. “At VfL Bochum, I am now one step closer to this dream, which I have been working towards for years. I want to play my part in ensuring that we as a team will continue to play in the Bundesliga next year.”