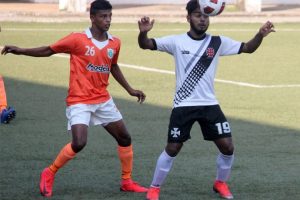 Marcus Mascarenhas and Victorino Fernandes scored a brace each for the winners while the other goal was scored by Cajetan Fernandes. Earlier, Hussain Pinjar put Vasco ahead before the Port Towners conceded five goals.

“I’m happy with the result as the boys were quite impressive today. They created lot of chances and scored goals too. This is a big push for us for the coming games,” said Sporting Clube de Goa coach Mateus Costa after his side’s win.

Flaming Oranje started the match on the front foot but were caught off gaurd as Vasco SC took the lead in the 19th minute through Hussain Pinjar. Down by a goal, Sporting Clube de Goa started attacking in numbers but Vasco’s midfield were strong enough to guard strengthen their defence line. Sporting Goa finally found the breakthrough at the half-hour mark when Marcus Mascarenhas shot from a distance which brushed off a Vasco SC defender and entered the goal.

Just when it looked like the team would walk 1-1 at the break, Vasco were unfortunate to concede a penalty when their defender brought down Sporting Clube de Goa’s Ganesh in the box. Referee made no hesitation to point towards the spot. Cajetan stepped over and coolly converted from the spot to give his side a 2-1 half-time lead.

Crossing over, Vasco SC were determined to get the leveller but second half substitute Victorino Fernandes, who replaced Ganesh just moment ago, scored team’s third with a solo effort.

The striker was exceptional on the field and boosted the team spirit and increased the tempo of the game. Flaming Oranje scored their fourth when Marcus Mascarenhas nodded in Cejatan’s perfect free-kick.

Vasco SC’s defence looked sloppy in the second half as compared to their first half performance. Victorino Fernandes completed his brace in the 83rd minute when he volleyed Fady Riad’s cross from the flank.