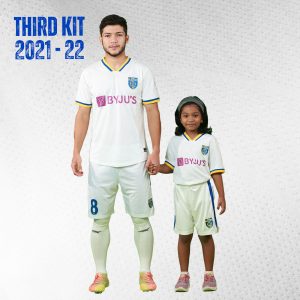 Kerala Blasters FC and Six5Six have launched the clubs third kit for the upcoming season of the Indian Super League. This season, Kerala Blasters intends to follow the theme of the Past, the Present and the Future. While the Home kit was a tribute to the 1973 Santhosh Trophy winning Kerala Team, the Away kit was dedicated to the club’s vociferous and passionate fans. The Third kit illustrates the dreams and aspirations of the youth of Kerala.

The newly launched all-white jersey is symbolic of a blank canvas. A canvas that depicts the endless possibilities one has, to be whoever and whatever they want to be for. A canvas that reminds one and all, especially the youth, to persevere and to stay committed to following their dreams.