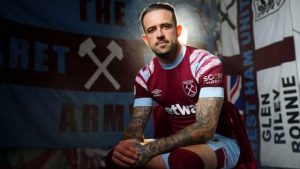 Ings, a senior England international, has joined the Hammers from Aston Villa for an undisclosed fee until the summer of 2025.

All paperwork was submitted ahead of the midday deadline for the player to be eligible for tomorrow’s Premier League fixture against Everton at London Stadium and the Club expects it will receive formal confirmation this afternoon.

The 30-year-old, who will add depth and quality to the Irons’ squad, is relishing the opportunity to play for the Club.

“I’m really excited to join West Ham United,” said Ings, who will wear the No18 shirt. “It’s important I settle in as quickly as I can do – and do the important stuff on the pitch for West Ham.

“We’ve got some massive games ahead of us – and I’ve come here to try and score as many goals as I can to help the team to get some positive results.

Manager David Moyes is looking forward to seeing the experienced striker join his squad and bolster his attacking options.

“I’m really pleased to add Danny to the squad,” he said. “He is a proven Premier League goalscorer and will add great competition for places in the attacking third.

“We’re looking forward to integrating him into the group, as we go into a busy period in our season.”

Ings, who has 68 Premier League goals to his name in 188 top-flight appearances, netted at an impressive rate of better than one in three for Burnley, Liverpool, Southampton and Aston Villa, with a single-season best of 22 for the Saints in 2019/20.

The hard-working Winchester-born striker has scored regularly wherever he has played, registering nearly 125 career goals and hitting the net for England in a friendly win over Wales at Wembley in October 2020.

An efficient and intelligent player with impressive technical ability, Ings’ work-rate and determination mean he also excels at regaining possession in the final third and running with the ball at his feet.

Raised in the village of Netley on Southampton Water, Ings started his career with nearby AFC Bournemouth. A prolific spell at Burnley led to promotion to the Premier League, a transfer to Liverpool and a senior England debut in a UEFA European Championship qualifier against Lithuania in 2015.

Ings joined Southampton in 2018 and produced three prolific seasons on the south coast, scoring 46 goals in exactly 100 appearances for the Saints across three campaigns, including 41 in the Premier League. He added two more England caps against Iceland and Wales in 2020.

He joins the Hammers as Aston Villa’s leading scorer this season with seven goals.

Everyone at West Ham United would like to welcome Danny and his family to east London and wish him the very best for his career in Claret and Blue.