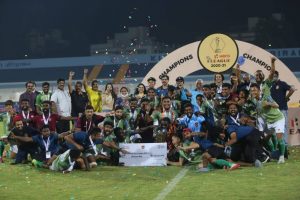 Gokulam Kerala FC were crowned champions of the 2020/21 I-League in spectacular fashion yesterday, March 27 at the Kishore Bharati Krirangan in Kolkata after the Vincenzo Annese coached side came from a goal down to score four goals in the second half and register a 4-1 win over TRAU FC.