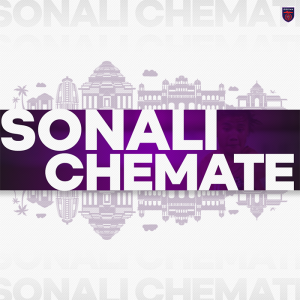 Hailing from Shingori, a small village in the Ahmednagar district of Maharashtra, Sonali was first introduced to sports in boarding school and was a passionate swimmer in her early schooling years. Her teachers recognized her excellent speed and stamina and encouraged her to be a part of the school football team.

Sonali took up football at the age of ten and participated in the SGFI Nationals tournaments several times. She also captained the Maharashtra State team once to victory in the school games. Through these tournaments, Sonali was scouted for the Oorja tournament. She did not look back thereafter and moved to Pune for advanced football coaching and training.

In Pune, she played with Puneri Warriors FC under coach Rahul Kad, before being scouted for the Inter-District tournament where Pune district emerged as Champions. Sonali was adjudged ‘Player of the Tournament’ and went on to represent Maharashtra for four consecutive years.

At the club level, Sonali first played the IWL qualifiers for FSI Club in Mumbai, and for FC Kolhapur in the Final round. During her stint with FC Kolhapur, she was scouted by Gokulam Kerala FC Women’s where she was an integral part of the back-to-back IWL winning teams, while also winning the Kerala Women’s League.

Sonali attributes her success to learning something new daily at training and implementing it in games, especially from her former coach Anthony Andrews whom she is grateful for his support and encouragement. She finds her motivation from her more experienced peers, and from participating in major tournaments like the IWL and AFC Women’s Club Championship. Now as a Juggernaut, Sonali says she would love to show her dedication to her new family – Odisha FC, and continue to grow and develop with the sport.

Head of Academy & Women’s Football, Randeep Baruah, said of our latest recruit to the Women’s team, “The first thing you notice about Sonali is her focus. Be it in training, a match or while warming-up when coming off the bench, she’s always ready to go to battle! A talented and dedicated player, she’s easily the hardest worker in the room. She brings a positive winning mentality to the team and we’re very happy that she’s committed herself to OFC Women’s for the next couple of years.”

Creating history by securing the first-ever sports ground reserved for girls in the country, Sabah …