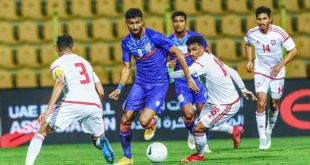 Will India & Igor Stimac learn from the heavy UAE defeat?

2016/17 I-League champions Aizawl FC lost their first-ever AFC Cup 1-3 to New Radiant SC of the Maldives with their striker Ali Ashfaq scoring a hattrick to remain top of Group Eat the National Stadium in Male on Wednesday.

It was a match-up of two former Mumbai FC coaches in Oscar Bruzon at New Radiant SC and Santosh Kashyap at Aizawl FC.

New Radiant SC went into the game on the back of a 1-0 opening-day win over Bangladesh’s Abahani Limited Dhaka, while Aizawl FC were making their maiden appearance in the competition.

After a goalless first half hour, the visitors broke the deadlock when Lalramhmunmawia tapped home from close range after first a surging Andrei Ionescu and then Albert Zohmingmawia were denied by goalkeeper Imran Mohamed.

The hosts levelled five minutes before the interval after Aizawl FC failed to properly clear a New Radiant SC attack and Ahmed Abdulla’s delivery back into the box was well finished by Ali Ashfaq.

New Radiant SC had the better of the early stages in the second half and Ali Ashfaq saw his sweetly struck shot well parried out by goalkeeper Lalawmouia just after the hour.

The visitors were then reduced to 10 men with 16 minutes remaining when goalscorer Hmunmawia was dismissed for a foul on substitute Guillem Marti, before the home team took the lead soon after.

Angel Luiz’s ball over the top was headed by Guillem to Hisam Saleem on the left touchline and his looping cross was met by Ali Ashfaq for his second of the game.

The striker then completed his hattrick with five minutes remaining when he acrobatically finished Ali Fasir’s headed pass to round off a fine night’s work.

New Radiant SC’s next task will be an away trip to 2016 runners-up Bengaluru FC of India in four weeks’ time, before which Aizawl FC host Bengaluru FC in Northeast India.