2019 AFC Asian Cup playoff qualifier: India want to get past Laos in second-leg! 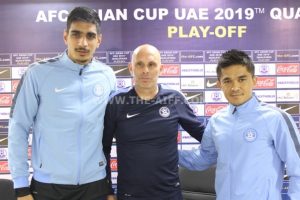 Despite registering a solitary goal win in Laos in the first-leg of the 2019 AFC Asian Cup playoff qualifier, , India head coach Stephen Constantine understands that the job is still “half done and anything can happen in the next 90 minutes.”

Speaking at the Official Pre-Match Press Conference, Constantine explained that “Laos are not a bad side and they worked very hard in the first leg. We have to concentrate on tomorrow’s game and aim to win.”

“It starts 0-0 tomorrow and we have no room for complacency against them (Laos). We respect Laos but we will try to beat them,” he added.

“We are approaching the game from scratch and the only advantage that we have is that we have played them and we know them. Apart from that there is no advantage,” quipped Indian skipper Sunil Chhetri, sitting besides Constantine.

“But we are ready for Laos and we need to win this match for the fans.”

“One of my main objectives was to build a Team for the future. And had I not backed the 25 Players to make debut for India, we may not have been able to put in a squad against Laos tomorrow. But we are not complaining,” he quipped.

“There’s competition for almost every position now. That’s such a healthy sign.”

For the record, India’s 0-1 win against Laos in Vientiane was the ‘Men in Blue’s first win away win in a Qualifier since 2001.

“When you wear the Indian jersey there is always pressure. In Football, everybody wants to win and even when there is no pressure, there is pressure,” Constantine echoed.

Highlighting on the gravity of the clash against Laos, he added: “One of my objectives was to reach the last stages of qualifiers of the AFC Asian Cup 2019. If we win tomorrow, that happens.”

Meanwhile, Jeje, Holicharan Narzary and Udanta Singh will be playing infront of their home crowd tomorrow and according to Constantine it is a “perfect opportunity to do show the crowd what they can do.”

“For a Player to play in front of his home crowd is very special, I hope they score lots of goals tomorrow as they have the platform for them.”

The match kicks-off at 7pm and will be telecast live on DD Sports. Furthermore, there will be a live streaming on www.the-aiff.com !

@Arunfoot
Previous VIDEO: Game On or Game Over? Go behind the scenes of latest New Balance film!
Next VIDEO: Welcome to Manchester | #GlobalCityFans visit the Etihad Stadium!