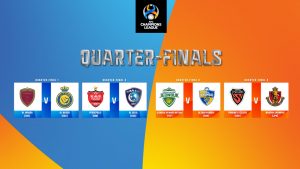 The stage is set for a scintillating 2021 AFC Champions League Knockout Stage following the completion of the draw in Kuala Lumpur, Malaysia on Friday.

With four former champions among the eight teams in the draw, blockbuster ties await fans with the centralised single-leg Quarterfinals and Semifinals of the East Region to be played in South Korea and the West Region matches and Final hosted in Saudi Arabia.

Two-time winners Jeonbuk Hyundai Motors while face defending champions Ulsan Hyundai FC in an all-South Korean affair while a third side from the nation, Pohang Steelers will face Japan’s Nagoya Grampus in the East quarterfinals.

The quarterfinals are scheduled for October 16 and 17 with the semifinals on October 19 and 20. The final is on November 23.