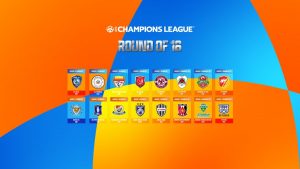 The cast for the AFC Champions League 2022 (East) – Round of 16 was finalised following the conclusion of the Group Stage on Sunday, May 1.

Leading the eight East teams were two former winners while a third failed to advance as the five groups produced high quality football across stadiums in Malaysia, Thailand and Vietnam.

South Korea’s Daegu FC advanced as the Group F winners, ahead of Urawa Red Diamonds of Japan on the head-to-head criteria after both teams finished on 13 points.

Two-time winners Urawa, however, also advanced as one of the three best runners-up.

BG Pathum United finished top of Group G, albeit after a nervous wait on Saturday, with the Thai side confirmed of pole position following Melbourne City’s 3-0 win over United City FC of the Philippines – with the Australian side having needed a 5-0 victory.

Melbourne City, meanwhile, missed out on a place in the next round.

Yokohama F Marinos joined Jeonbuk Hyundai Motors from Group H after holding their South Korean rivals 1-1 on Sunday, with the Japanese side finishing top on 13 points.

Jeonbuk’s 12-point-haul meant the two-time champions had confirmed their spot irrespective of their result against F Marinos, as they advanced as one of the three best second-placed sides.

Japan’s Vissel Kobe emerged top of Group J, as the 2020 semifinalists finished ahead of Kitchee SC. There was, however, joy for the Hong Kong side as they took one of the best second-placed berths available, making the Round of 16 for the first time.

The East Round of 16 ties will see Daegu take on Jeonbuk, Pathum United against Kitchee, Vissel Kobe will play Yokohama and Johor Darul Ta’zim will go up against Urawa.

The East Zone Round of 16 is scheduled for August 18-19, quarterfinals are on August 22 and semifinal is on August 25, with all ties single-match affairs.

The West Zone knockout stage is scheduled for February 3-10 with the final to be played over two legs on February 19 and 26, 2023.