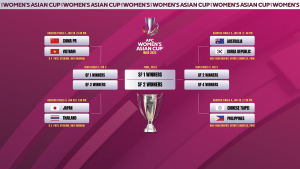 The line-up for the 2022 AFC Women’s Asian Cup – India quarterfinals was completed on Thursday, January 27 with five previous winners among the eight teams advancing.

Australia, China, Chinese Taipei, Japan and Thailand were joined in the knockout stage by South Korea, Philippines and Vietnam.

Thailand and Vietnam advanced as the two best third-placed teams following the conclusion of the group stage on Thursday.

Eight-time champions China, the first to book their quarterfinal spot, advanced as Group A winners and will face Vietnam next.

Group A runners-up Philippines, through to the knockout stage for the second successive AFC Women’s Asian Cup, play Chinese Taipei in the quarterfinals.

Australia, the 2010 champions, will meet South Korea after completing their Group B campaign with a perfect record of three wins. South Korea finished as the Group C runners-up. Two-time defending champions Japan, the Group C winners, will face Thailand.

The quarter-finals will be played on January 30.