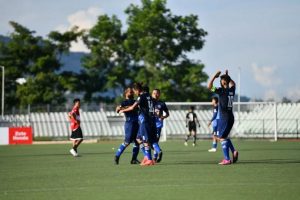 Beautiful football finally paid off for Electric Veng FC as they pulled off a thrilling 3-2 win against FC Bethlehem in the final fixture of round 5.

Electric Veng FC brought their usual flair and passing game and were rewarded early on with a strike from Vanlalremsanga in the 6th minute.

Vanlalremkima doubled the lead on the 35th minute and Malsawmhlua was on hand to score their third in the 65th minute.

But their usual defensive frailties were exposed once again late on as FC Bethlehem scored through Lalnunzira and Lawmsangzuala to make sure it was a nervous ending for Electric Veng FC.