Ahmedabad’s The Arena by TransStadia nominated for prestigious ‘Stadium of the Year 2017’ Award!

Arunava Chaudhuri 2018-02-05 General Comments Off on Ahmedabad’s The Arena by TransStadia nominated for prestigious ‘Stadium of the Year 2017’ Award! 4,421 Views 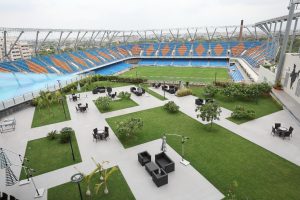 With India’s sports industry being at the sunrise of its life, The Arena by TransStadia, a world-class sportainment infrastructure in Ahmedabad, is among the top 27 global nominations for the STADIUM OF THE YEAR 2017, the world’s largest competition of its kind hosted by StadiumDB.com and Stadiony.net .

The Arena by TransStadia fulfilled the entire evaluation criteria, many of which were stringent to match. The stadium should have hosted at least one event with all stands available to the public. The competition is focused on football stadiums, which means they choose between venues that are capable of hosting a football game.

Udit Sheth, Founder & MD, SE TransStadia said, “Being nominated for the Stadium of the Year 2017 is extremely exciting. We are nominated among some of the most noted stadiums from across the globe. This is a truly ‘Make in India’ project with some never-seen-before technologies used in sports infrastructure. We seek the support of India to vote and bring this glory home!”

The Arena by TransStadia is one of the first successful public-private partnerships with an aim of propelling India to a multi-sports culture, creating a sustainable sports infrastructure and ecosystem where young talent can grow and develop. Innovative in its functionality, the Arena will serve as a state-of-the-art venue housing 16 sporting disciplines, making it India’s first and largest integrated multi-sports facility.

Some of the other nominated stadiums include Mercedes-Benz Stadium, USA; Orlando City Stadium, USA; U Arena, France; Mikuni World Stadium, Japan to name just a few.

India’s Youth Affairs and Sports Minister, Rajyavardhan Singh Rathore tweeted “I wish @SETransStadia the very best. Come on India! Cast your votes and let’s make The Arena stadium in Ahmedabad as the best Stadium of the year 2017.”

· To vote, please select your ‘top five’ stadiums from the list of 27 nominees, giving 5-star rank to the best, 4 to the second best and analogically with 3, 2 and 1 star

· Please mind – only one vote can be sent from every device

· Above link is the only means to vote

· The stadiums are listed alphabetically, The Arena is 5th from the bottom