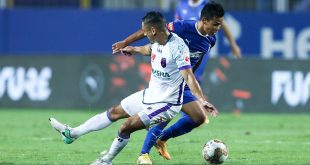 Hyderabad FC held to a goalless draw by Jamshedpur FC!

With his red card, Ahmed Jahouh had become the first player to be send off in the seventh season of the Indian Super League.

The said incident occurred in the 42nd minute of the match when Ahmed Jahouh made a harsh, two-footed tackle on NorthEast United FC midfielder Khassa Camara. Video footage of the reckless tackle was sent to the committee for review. On inspection, the AIFF body deemed it a serious foul play offence and added that it endangered the safety of the opponent on the field.

But despite the warning, Jahouh has only been given a one match suspension and he would miss Mumbai City FC’s upcoming game against his former team FC Goa tomorrow.